Show off your mod creations or just a work in progress.
Post Reply
142 posts

So having observed the large Roads of Daggerfall thread for 3 years, it seems like a good roads system for DFU is a way off still. It's a hard problem to solve certainly, and not one I intend to tackle. I tend to take a different approach to stuff which is working out what is the simplest thing that will work. I had this idea when I was migrating the terrain generation code to the Unity Jobs system a year and a half back and decided to try it out last week to see how well it worked.

The idea is to have a single byte for each map pixel of the Daggerfall world indicating which of 8 directions a road leads out of the terrain, then modify the terrain texture code to paint roads in each marked direction from the centre. This has a negligible performance hit as it simply runs during the normal tile assignment, so should make no appreciable difference to terrain generation speed so still allowing time accelerated travel at the same rate etc. There's a new road flattening code module in the generation path to smooth the roads a bit, and that will have a minor performance impact.

I've implemented this, and while very simple, it actually works really well in-game. The biggest issue with this method is that where the roads intersect locations, they don't always line up with the city gates etc. I've taken a very simple approach to solving this issue by encircling any location a road goes to with road - 2 wide for cities and 1 wide for smaller towns etc. This is not ideal, but is a compromise so that this simple scheme works.

Eventually I expect that a more refined roads implementation will be created, but for now we can use these simple basic roads. I considered seeding the path data from some of the work done by Meritamas on procedural generation, and then refine by hand using an editor. However, after creating the editor and trying it out I've now done 4 regions already... it's taken a few hours but was actually quite fun to do. For this reason I don't plan to seed path data, but will simply create all the paths using the editor by hand. To allow for crowd-sourcing this effort the editor creates a text file of the binary path data so others can make changes and send a PR to me and git should be able to merge in the changes. I hope anyway, since the lines in this text file are 2000 characters long it may not work.. we will have to see how it goes.

Here are some pictures of roads in game and the editor. 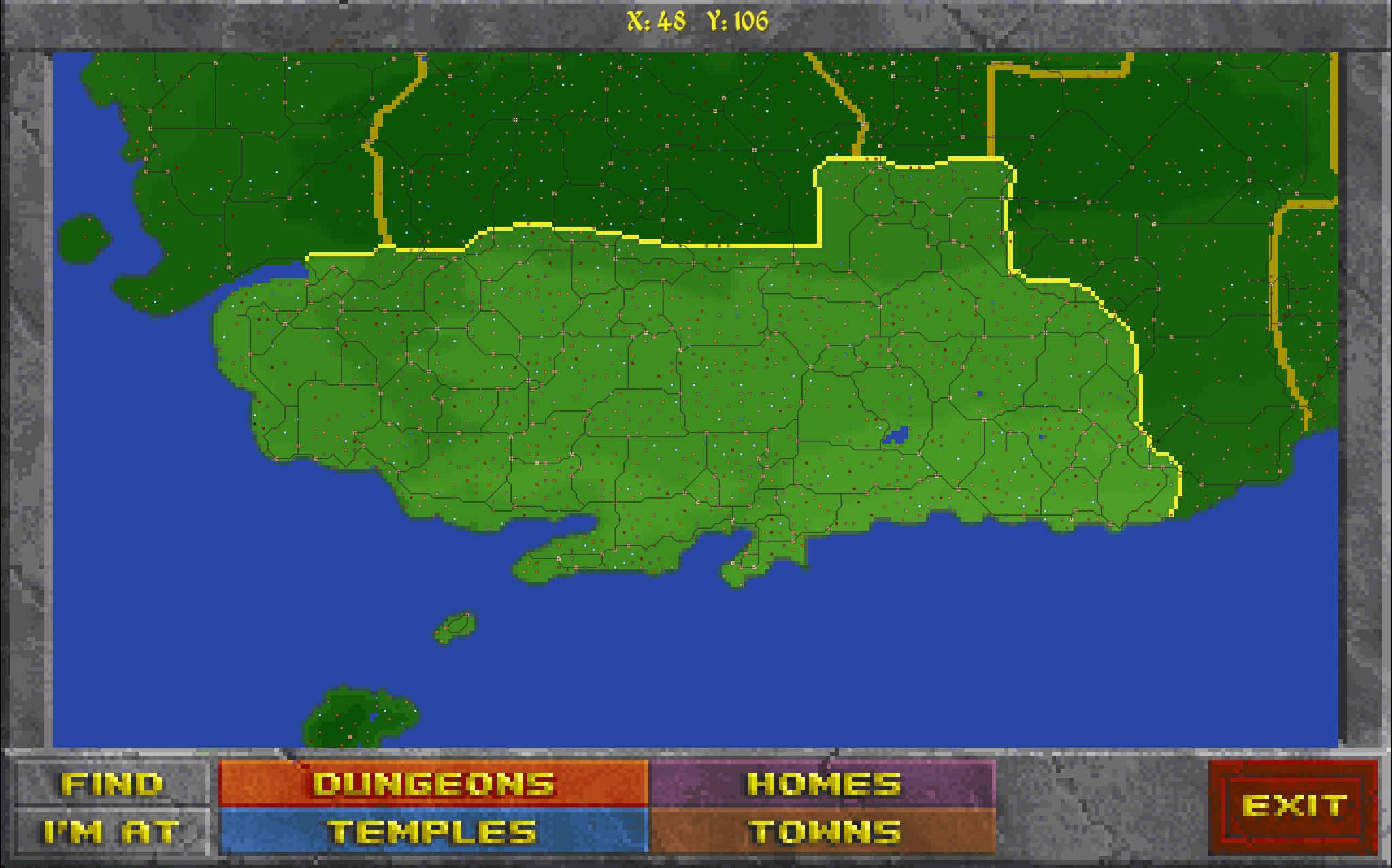 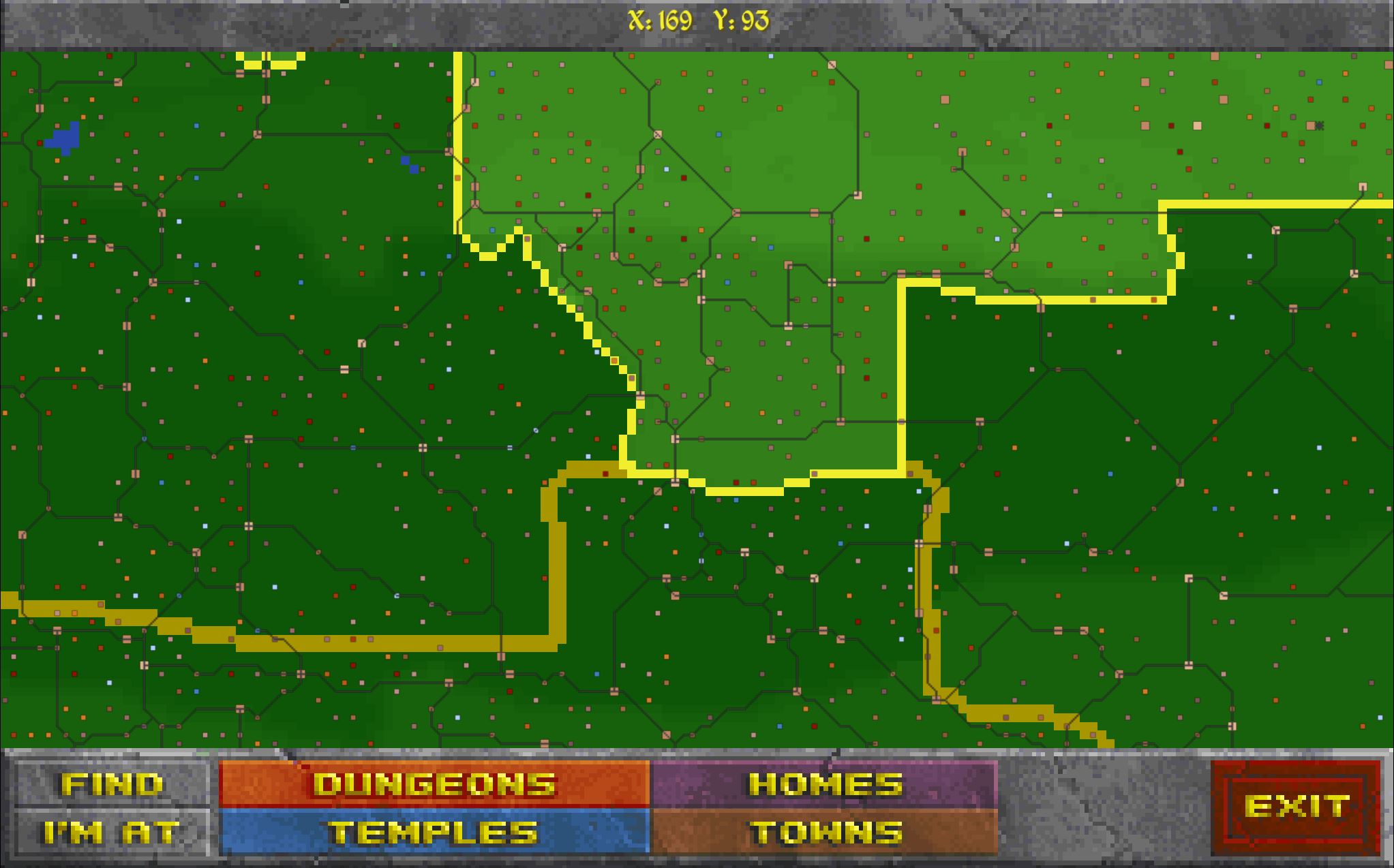 So, calling anyone who wants to path out roads for this mod - it's now time for you to have a go. You can now use the released v0.5 build with DFU 0.10.26. Regarding the roads I've already pathed - they need looking at in game, with focus on travelling to different locations and seeing if the road layout works well with the ground tiles / gate placement. If you find a small correction you can make to improve the paths, then please use the editor to make the changes and post here with before and after screenshots. I cannot merge the data files and will need to make the edits by hand from the screenshots.

Regions still remaining to be pathed:

You must follow these rules to path new regions: Editor instructions:
Have fun!
See my mod code for examples of how to change various aspects of DFU: https://github.com/ajrb/dfunity-mods
Top

VERY COOL! I was hoping a project like this would pop up eventually. My only input would be to leave some kind of breadcrumb trail that 'slow-travel' modes like Tedious Travel can follow. Also, the markers can allow for changes in random encounters (less dangerous events) compared to the open wilds.
Top

Quick question, would it be possible to do this with several "layers" of different types of tile? Because if you could have a layer that adds road tiles and one that adds water tiles, I'm thinking this could be useful for the creation of rivers too!
Released mods: https://www.nexusmods.com/users/5141135 ... files&BH=0
Daggerfall isn't the only ridiculously intrincate fantasy world simulator with the initials DF that I make mods for: http://www.bay12forums.com/smf/index.php?topic=177071.0
Top

I love the idea of using this for rivers. Could you use altitude data to figure out start points for the rivers? Aka, vast majority of rivers a formed from high elevation drops.
My Daggerfall Mods: l3lessed Nexus Page

I loaded up the editor and gave this a shot. 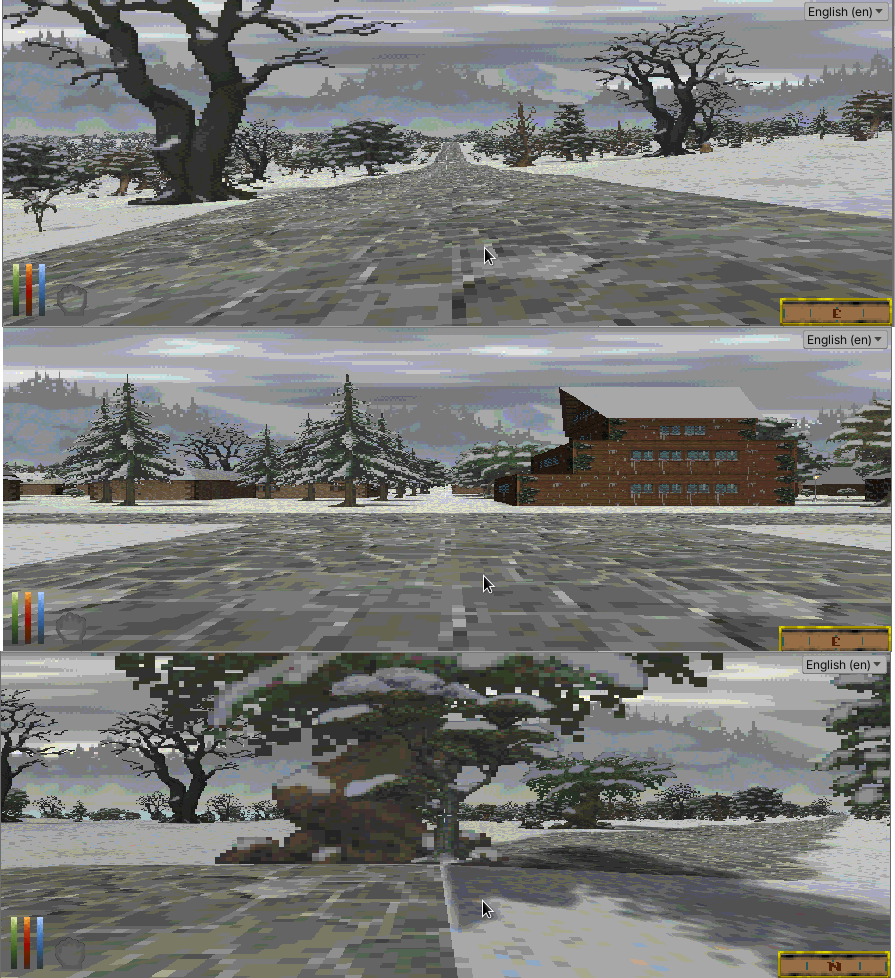 Trees utterly fail to spawn in the way, which makes these roads look very well-maintained. They look like they matter -- like Gothway Garden and Burgtry actually depend on commerce from one another. The placement is occasionally a little glitchy like in the third screenshot, but this is a huge step for realism in DFU.
Farewell DFU community! My time here has been a joy.
Top

Nice to have some feedback, thanks Jay. Did you try the editor?

Regarding the last screenshot, this occurs on diagonals where it crosses over from one map pixel to the next. I could prevent it with some more code I think, but wanted to see how it felt to people in game first. Someone mentioned that roads may be damaged in places and this could represent that. The worst part is that trees etc can spawn at these points, so I probably will see what i can do to fix it.
See my mod code for examples of how to change various aspects of DFU: https://github.com/ajrb/dfunity-mods
Top

Hm, one thing that strucvk me: Would it be possible to have different road types for different climates? The grey stone roads look fine in daggerfall, but would look odd running through the desert...
I'd almost say the desert climates generally shouldn't have roads?
My released mods

WhiskeyTangoWoodElf wrote: ↑Sun Aug 09, 2020 11:56 pm My only input would be to leave some kind of breadcrumb trail that 'slow-travel' modes like Tedious Travel can follow.

Cheesy thought for anyone wanting to mod Tedious Travel: That sounds reasonable in my head, but there is the question of actually travelling ON the roads as opposed to just "in the same direction" as the roads. That requires finer location logic than the above, obviously. I assume that the current position's texture type can be queried... If so, maybe just change all of the above "if the pixel has roads" conditions to "if the pixel has roads AND your current ground texture is road".

(Sorry if I'm rambling... Been travelling, and I'm currently in Monday morning mode. But I think what Hazelnut has already provided should be enough information for Tedious Travel to make a reasonable stab at road usage without additional markers.)

I look forward to a second byte that works the same way, but denotes "worn paths", which could be used to branch off to villages and farms and such... Would complicate the editor a bit.
Top
Post Reply
142 posts