Show off your mod creations or just a work in progress.
Post Reply
111 posts

These animations are just random motion-captured animations I've found in the web. I'm an awfull animator, actually. Moreover - attacking animation for the guard is not supposed to remain in the final model - the original sprite has no attack animation, it is just an NPC.

Here is the Ancient Vampire:

I don't very much like style and animations but it awesome to see du get more and more quality modders and mods from different people, this really will help daggerfall become popular again

I dont quite understand what style you have in mind, because I was trying to make almost a replica of original model. Does it mean that you offer to get rid of the original style of Daggerfall?
Top

Given that you're just doing the models, I like this so far.
Previous experience tells me it's very easy to misunderstand the tone, intent, or meaning of what I've posted. If you have questions, ask.
Top

For me personally it looks not like in original game - bodies had different proportions and deatalisation. But yep, original animated sprites not perfect - it very outdated by modern standarts 3d render. For "flat people" at least need draw detailed texture since original sprite is artist-painted.

Don't consider my posts as "you need do so" - it just my opinion and that's all.
Top

Well, speaking about proportions, I probanly unintentionally made models a bit less bulky, but this picture proves that in general they are quite the same. 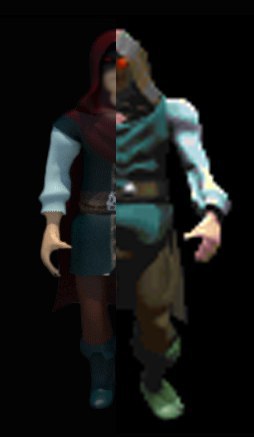 Also, your replies are rather discouraging, because they have not got any hints on how to improve the models but only proclamations that it is not good. Sorry for my agressive style, though. I had some issues at my job recently, so I probably overreact on any criticism.
Top

rhymer wrote:Well, speaking about proportions, I probanly unintentionally made models a bit less bulky, but this picture proves that in general they are quite the same.

Also, your replies are rather discouraging, because they have not got any hints on how to improve the models but only proclamations that it is not good. Sorry for my agressive style, though. I had some issues at my job recently, so I probably overreact on any criticism.

They not same - using original sprites for inspeartion not a good idea since they are may be in different poes, too low resolution and not maded very good. But still - on this pic I edit it may look not good, but his leg actually much longer, he just walking and leg not in idle position. About body proportions - I think best be to fistly just model or steal model of base human, and then "dress" it, since look like for 3d models authors use same 3d model as base. Your current body proportions are way too cartoonish for my personal taste. And make system like in more modern games tes where there are races with base-bodies and all other stuff is just armour and different effects on body. There are no reason to keep flat people and "humanoid" monsters since it was just because limitations of sprites, system requres and dev time during development of tes2

Second - question of detalisation and finished look for me always important. Your current models are quite high poly, but still very low detalaised. They look very soft and modern - but same time very, very plastic and very cartoonish. It will look not good for me personally. And if you add more detalisation and textures - it will not fit in original game at all. Original sprites renders of monsters had not very big detalisation too, but artists make ILLUSION of their detalisation on sprites by good shadows and animation, but same model will not work if they pur actual 3d model they used to render in game. That's why I so on low poly - with classic low poly modelling you may same time do not so detalised model, but draw on texture all requred detalisation and it still will fit perfectly in original game.

Also, about oriinal 3d renders - you don't notice all look like plasticine-rubber? Clothers use similar wierd colors and textures on original model are so... monotonous? That's because 3d rendering and all that stuff was pretty bad in that time - me personally don't like this style even when it used to make 3d rendered sprites. 3d rendered sprites alway are more low quality compare to hand drawed ones...

What I actually mean - At first, textures are very, very important and they need be not simple, since original game is wery artistic with a lot work on this side. At second - I think that this will be much more logical just start from original bodies and than do a little bit more complex mod that remade all or at least most important flat people and human monsters into actuall system race-and-dress-on-it like in tes3-tes5. And at last - choose different style. Not only me not like style of current models, and a lot people will have opinion that dagerfall with that will peobably look like not very good indie game.

Ah, also, you may ignore what I post, it's really your opinion what do or what not to do, just say that your current way requre a lot, a tons of professionalism and it will be very hard to make really attractive models and animations with 1-1 original style. There was guy on XL that was try to do like that - https://www.youtube.com/watch?v=j_DsYtvacxk Yep, may look not bad, but I don't really know how actually it will look in game, Probably, not very good.
Top

just to throw in a different opinion (mine). I like the vampire quite much. Especially the style is pretty good imho. Seems like always to be a matter of taste.
about proportions of the model: biboran might be right that the original model is taller, but I don't think it is that much off as biboran thinks

I like the vampire model also. Quite a bit actually...

For me, I think one of the reasons it might look a bit strange is because we're so used to seeing the 2D version. I feel the same way whenever I see a 3D Simpsons character in the world (like a figurine or a costume) or in a video game. Only the 2D version looks "right" to me. The 3D version just looks too round somehow.

My preference will always be with the 2D sprites, but I know 3D models are important to a lot of people. I think this is very promising early work that opens up discussions that need to happen for modders to work out how these sprites are best translated to three dimensions.
Top

I think that, due to the amount of models for npcs and humanoid foes Daggerfall requires, a good practical idea would be to use a base body mesh with a topology we all agree upon (by "we" I mean people who are going to make models), and work from there.

This bring the following advantajes:

-Only have to more or less weight paint once.
-Unwrapped UV map and base skin texture that everyone just need to modify to server their needs if they want.
-We can use one base skeleton, that way we can share some base animations like walking and so on.
-This kind of approach is good for modular clothing, that will serve for NPC actually wearing clothing and armor pieces that can be found in their inventory (moder's stuff obviously).

With a base mesh with good topology you can change the shape of it to make almost any tipe of body you want, the same with the face, so if you want to make more cartoonish looking character only need to deviate from the bashe mesh in term of shape and texture, bot the model would still be compatible with everything else.

If we do this we can also use the capability of Unity (that I will assume it's there since every modern 3D engine has that) of scaling the models to diferenciate races by size besides texture and shape.
My Deviantart page, I have some Daggerfall stuff in there.
Top
Post Reply
111 posts