A curated forum for compatible and maintained mods. Users are unable to create new topics in this forum but can reply to existing topics. Please message a moderator to have your mod moved into this forum area.
Post Reply
4 posts • Page 1 of 1

Jobs of the Thieves Guild adds 12 new quests that can be taken from the guildmaster. Those quests explore other avenues of the underworld such as loan sharks, prostitution, protection money and conflicts with a rival criminal organization.

Indeed, it brings back the Wharf Rats from Arena, who were the Thieves Guild's rivals. They will sometimes be the enemy in some of the quests' scenarios.

Most quests have more than one scenario so that they do not always play the same way.

Find out why a shopkeeper stopped paying for protection, recover gold from an indebted citizen, hire a wizard for the guild's protection, accompany a group of thieves in an hostage exchange with the Wharf Rats, and more.

I hope you had as much fun as I had creating these quests.

Either install using Vortex Mod Manager or install manually as described below.

Extract the content of the archive to the StreamingAssets of your Daggerfall Unity directory.

If you already have the "Cliff" folder, you can overwrite without issue.

1. Loaned Gold Recovery - Recover gold from an indebted fella
2. Letter of Pardon - Steal a document from a palace
3. Healer! - Heal or find a priest to heal a guildmate
4. Stolen Casket - Unlock a casket with a spell
5. A Dame to Hurt For - Beat up a prostitute's aggressive customer
6. Mages Guild Burglary - Steal a magical trinket from the Mages Guild
7. Taking Care of Business - Find out why a shop stopped paying for protection
8. Wizard Help - Hire a wizard to protect the Guild
9. Jewel Smuggling - Recover a jewel from an adventurer
10. Hostage Exchange - Proceed to an hostage exchange with the Wharf Rats
11. Botched Burglary - Find out why a thief never returned from a burglary
12. First Warning - Invite a freelance thief in the Thieves Guild

Interkarma and the wonderful community that gave us Daggerfall Unity
JayH for the excellent Quest Tutorial.
TheLacus for the great Daggerfall Quest Editor.
Projet French Arena for access to Arena's original dialogue.
Daggerfall's development team, how could I not credit them?
Gorion's Ward for kindly testing most of the quests
Everyone else who answered my quest making question on Daggerfall Unity's Discord.

It's possible that I will add new quests. Here are some I've thought about :

Sleepy Burglary : Know the Sleep spell? Assist a burglary by putting the owner to sleep while a fellow thief robs the place.
Gang War : Wharf Rats operatives have ambushed and killed some of your fellow thieves. Time for payback.
Jewel Heist : Participate in a heist in a jewelry store (be the runner, bagger, brute force)
The Contest : Be the first to break in a residence and steal a valuable item. It's a friendly competition against other thieves.
Shipment : Go to a farm with two other thieves and wait for a shipment. Possibility to be attacked by the Wharf Rats.
Wanted : Break into the palace and destroy a "wanted list" before it gets published.
Knight in Disguise : Impersonate a newly appointed knight at a palace to steal a noblewoman’s necklace.
Bloody Deal : Bring a vial of noble blood to a vampire hiding in a crypt. 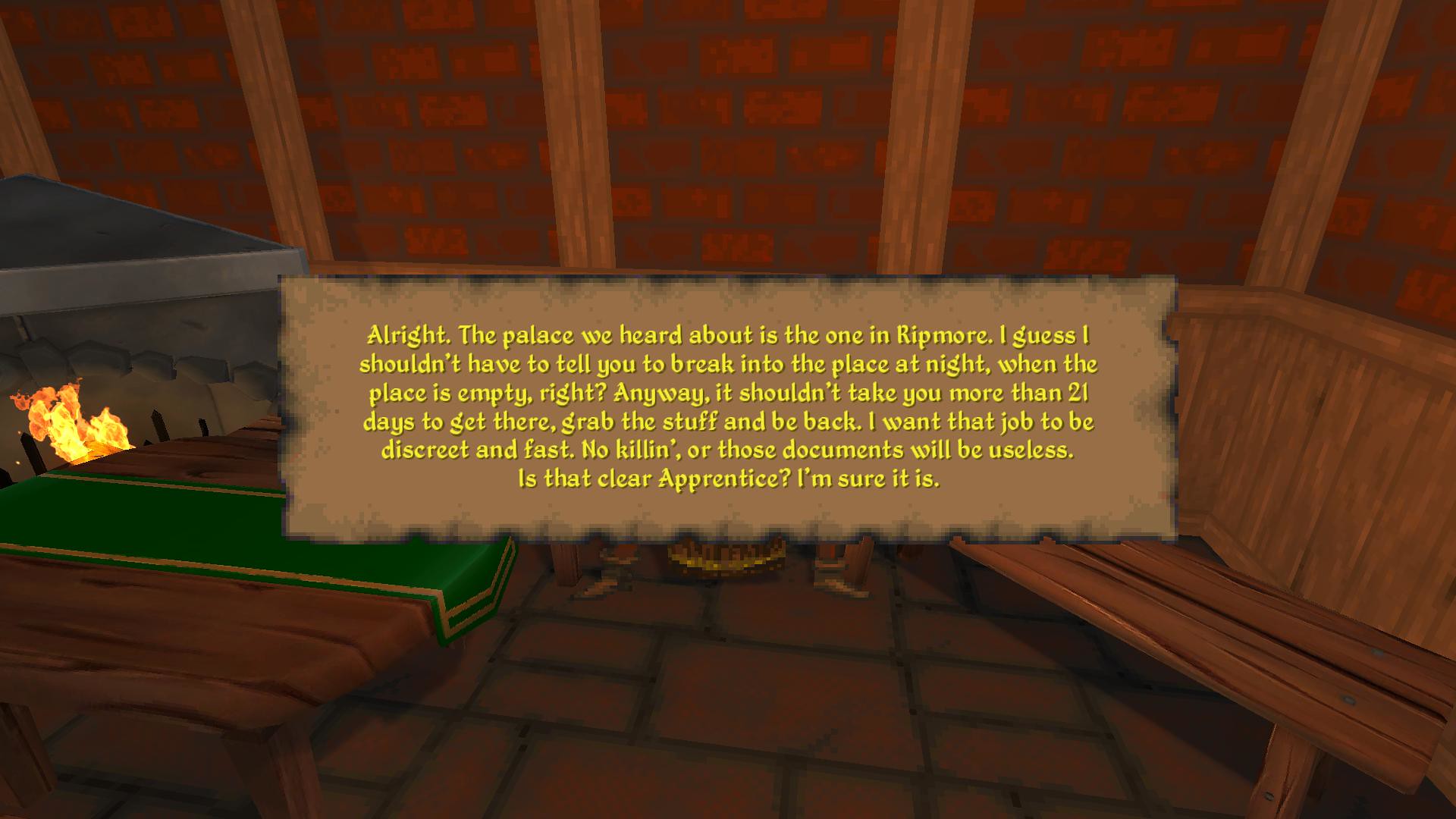 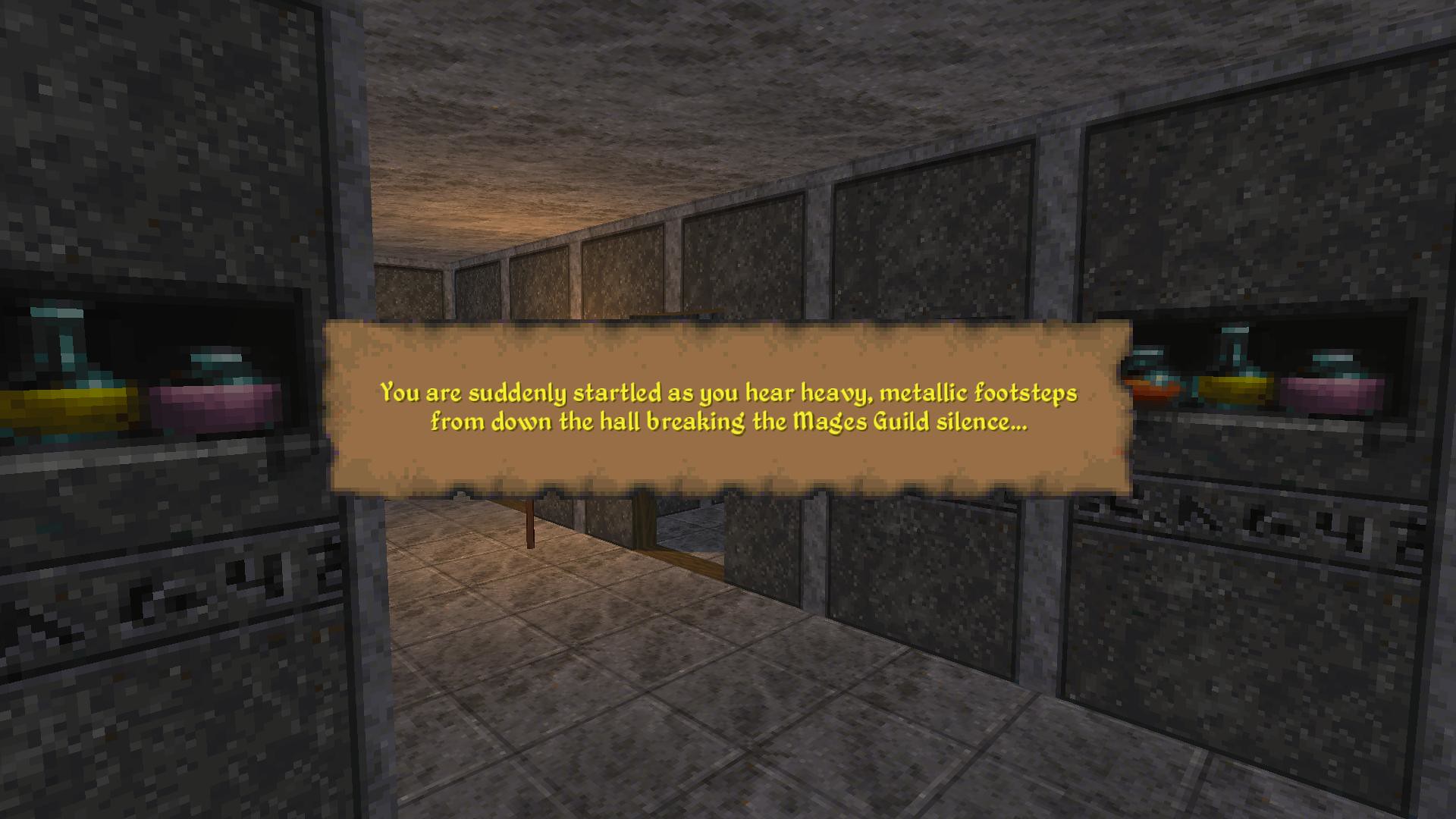 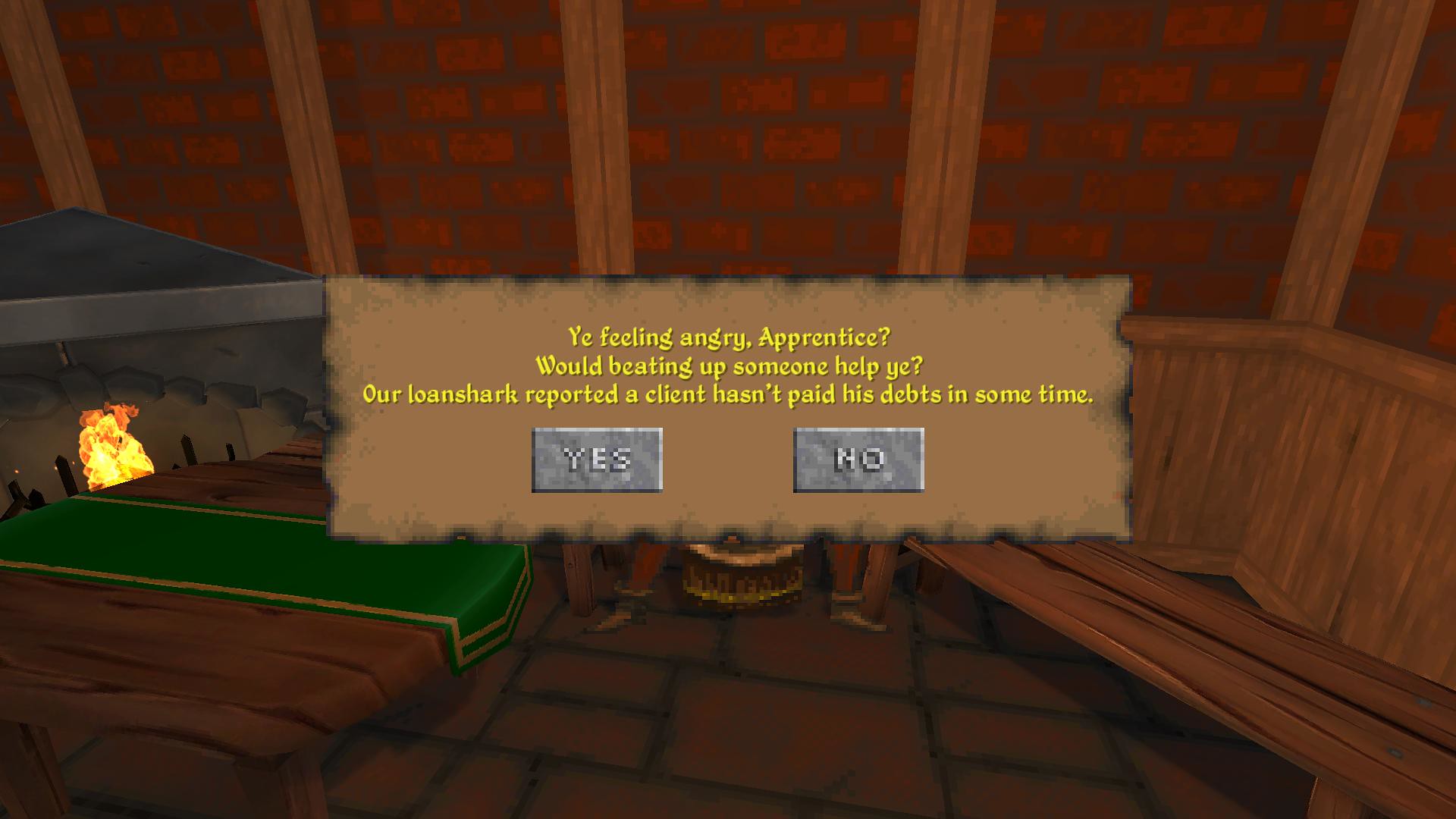 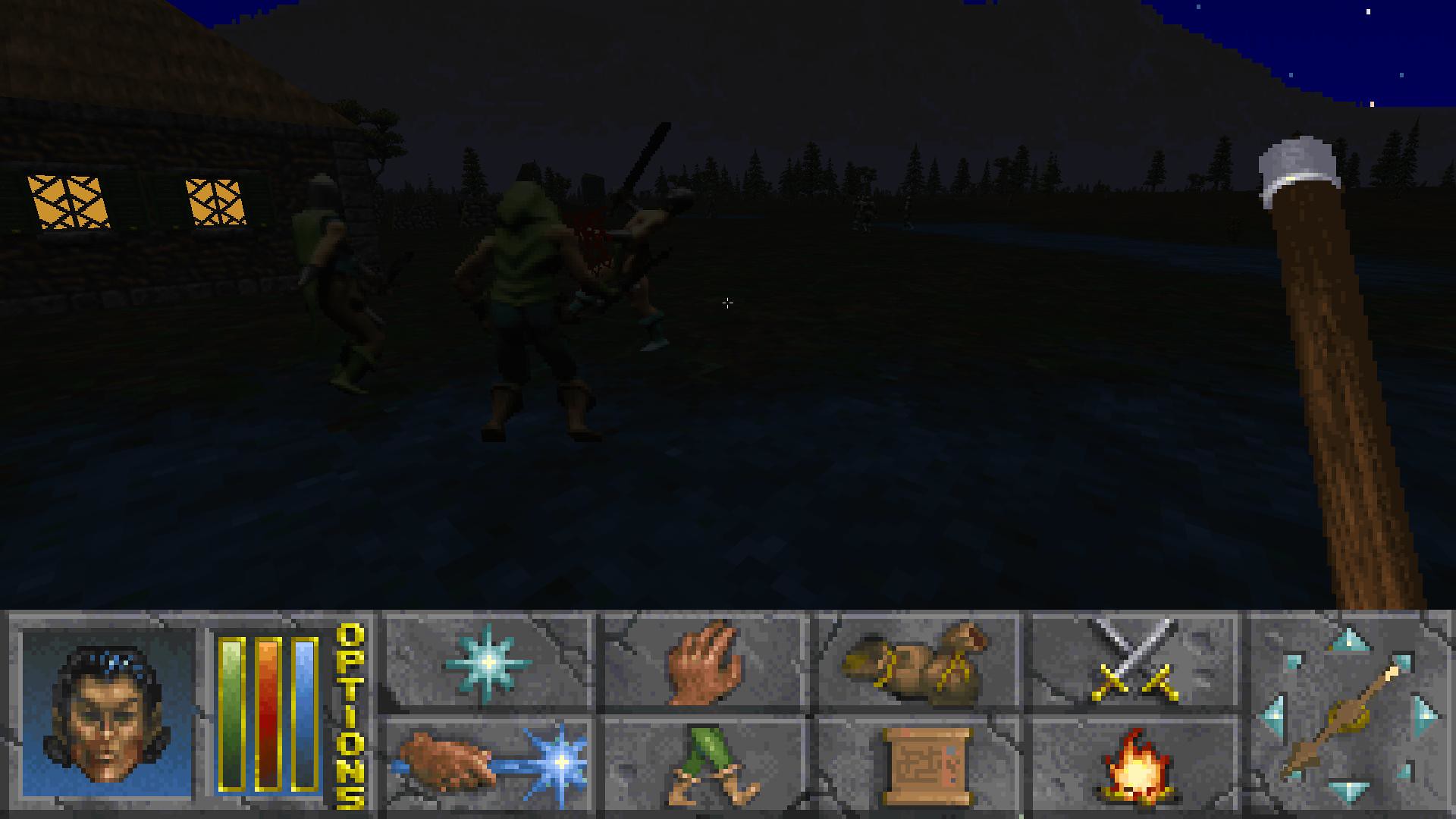 Very cool. Im willing to write some text for the quests if needed.
Top

Thanks for the offer.

I will certainly take it, since the meat of Daggerfall's quests lies in the writing more than the mechanics. I'll get back to you on which quests are not yet written.

Like I mentioned, there may be some changes to the ones I've planned as I need to test out some mechanics first.

I've decided to release it at 12 quests. To be honest, I was getting tired from running back and forth from the guildhall to my quest targets. I want to create quests for the other factions as well. I may still update it, though. Once a rogue, always a rogue.

Regnier, once I'll be ready to make new quests, I'll contact you. I'm sorry I hadn't before. Those 12 quests were already written. I'll keep in touch.

Shadow hide you.
Excuse the gloom.