I am working on a small mod /s

At the moment it's replacing Town NPCs (the wandering ones) with 3D Models. The goal is to create a full standard system to replace all types of NPCs with 3D Models.

This means: Here's a short video of the mod in action (Actually these are two mods, see further below):
[youtube]https://www.youtube.com/watch?v=nYraUk8E2Xg[/youtube]

The model is still a placeholder, my goal is to recreate the vanilla look in 3D. Maybe my approach is to high poly, see here for a WIP (Blender Screenshot): 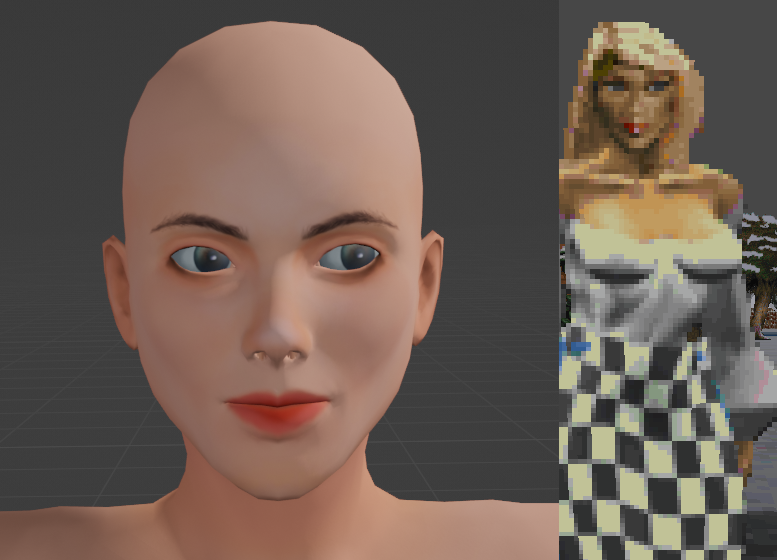 The Mod consists of a base mod which provides the replacing mechanic and default animations for females (and later males). I am no 3D Artist, but I try my best

Struggling with hair an clothes still.

The other mod is a package containing prefabs representing the 3D models with or without custom animations.
Everyone using the ThreeDee base mod can create new mods containing new 3D models.

I hope I am able to get it working in a build version soon. As of now there is
- [Solved] a Pull Request pending that enables the possibility to even run this mod without breaking the NPC interactions
- [Solved] and another issue with getting this mod running in release mode (post on forum).

I am planning on releasing the full source as soon as possible, including a base model which I will use for future additions.
Then everyone can feel free to contribute to the code or the models

When released it should be instantly be possible to replace every town NPC there is based on race, gender and clothing variation).

I am not quite sure in which direction the "vanilla" 3D models should go ... maybe Morrowind style of retro 3D graphics or going down the more "higher poly" route?!

, but I saw the Gog Version of Daggerfall Unity and the possible feature that could be added and got interested. Started last week to get into modding DFU ...
Last edited by AncientGrief on Sat Jul 02, 2022 4:20 pm, edited 3 times in total.
https://github.com/AncientGrief
Top

The Smiley face mod is awesome.

This would be a great mod for all nudity in DFU to have 3D hovering smiley faces covering the naughty bits. At last Youtube would be safe from Daggerfall.
Remember always 'What would Julian Do?'.
Top

Maybe I should make it so, that when the player deactivates player nudity, all 3D Models use this emoji texture :p

I uploaded another video without the texture, hope this does not get flagged 18+

As it would be better to pool efforts rather than duplicate them, you should take a look at Nine's 3D People, a few threads below yours. Ninelan has completed models of almost all monsters and almost all female NPCs.
Vanilla Enhanced: https://www.nexusmods.com/daggerfallunity/mods/273
World of Daggerfall Project: https://www.nexusmods.com/daggerfallunity/mods/249
GIS Construction Set: https://github.com/drcarademono/GIS-construction-set
Top

Thanks for pointing out his thread. Will check it out