So I was actually playing the game for once and realized something that I had not before while dungeon crawling. That being I found it really confusing for some reason to visually read/interpret the dungeon mini-map. After realizing that each module "pixel" is made of 4 other sub-pixels, I thought of something that would at least for me really help with readability, and reduce the confusion/intimidation of planning out how you will find a quest objective in a random dungeon.

Here is the original screenshot: 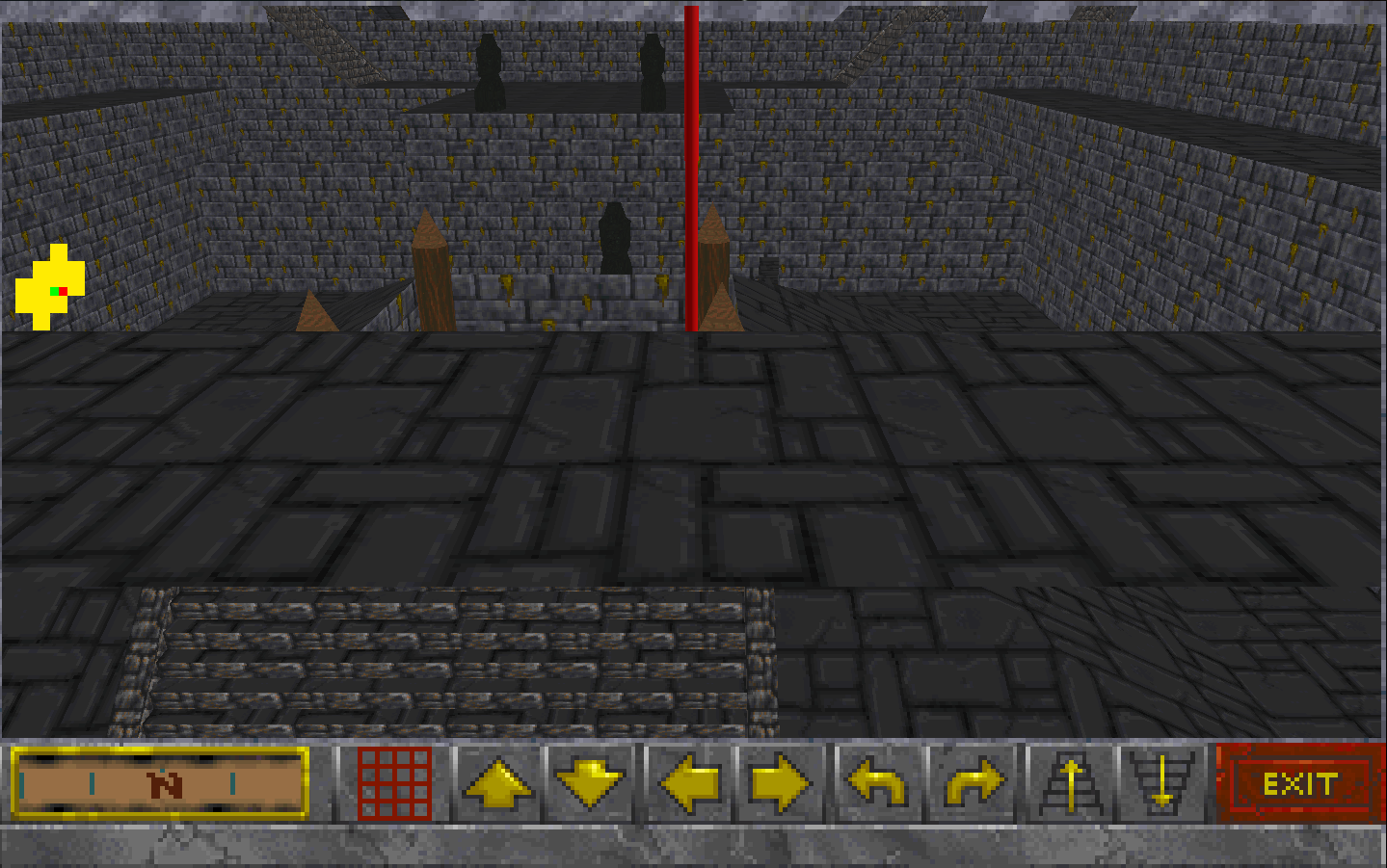 And here is my edited image to show what I'm considering:

Hopefully it's clear what I'm getting at, basically color the inner and border blocks/modules on the dungeon mini-map differently so you can more clearly see which parts of the mini-map are actually useful to your progression through exploring a dungeon.

Now the question part is, I don't know how difficult this would be to implement because I don't know if the code that creates the little mini-map has any information on how to differentiate what is and is not a border block and such and how it might color them differently and such in practice.

Seems probably silly, but I think this would make for a good optional setting, it also just looks nicer in general than the yellow blob of a mini-map that is currently in the vanilla game.
Top

Link to my github here.
And here is my nexus profile.
Top

Absolutely never even came close to understanding what that yellow blob means in over 25 years of gaming, so anything which makes it just a bit more user friendly is a good step forward.

This seems like a good thing that could belong to the accessibility tab.
You can support me and in turn my art on my Patreon.
https://www.patreon.com/fireflyness
Top

Code-wise it shouldn't be too hard. Border block names always start with B0000x so you just ignore those and change the color being drawn for the other ones, there might be a few exceptions in the special dungeons but that's manageable I think.

It's up to Interkarma wether he wants to add something like this, I do agree with Ninelan, it would be a nice setting to add to the options. It might even make people more willing to go for the vanilla dungeons instead of the small ones.
Daggerfall Unity on UESP: https://en.uesp.net/w/index.php?title=T ... fall_Unity
Daggerfall Unity on Nexus Mods: https://www.nexusmods.com/daggerfallunity
My github repositories with mostly DFU related stuff: https://github.com/BadLuckBurt
Top

After I started to better realize how dungeons are constructed and where the quest markers are only able to generate, has made the "need" to use "tele2qmarker" alot less frequent than it used to for me.

Just something I realized was trying to determine the "shape" of the dungeon and when they get larger it's really hard to read just how many "non-border" blocks make up the dungeon in question, making reading where you are in terms of progress harder than it needs to be, imo.

So yeah, making it clear which blocks in the mini-map are border and non-border would be pretty helpful, at least for somebody who now currently understands mostly how the dungeons and the quest markers work. For those who are still blind to how that part works, may not be as helpful though, lol.
Top

It definitely helps with the readability. I know too much about how they're built so I don't really need it but it would help (new) players with quests as those items and NPCs only spawn in the non-border blocks which are easy to identify with this change.
Daggerfall Unity on UESP: https://en.uesp.net/w/index.php?title=T ... fall_Unity
Daggerfall Unity on Nexus Mods: https://www.nexusmods.com/daggerfallunity
My github repositories with mostly DFU related stuff: https://github.com/BadLuckBurt
Top 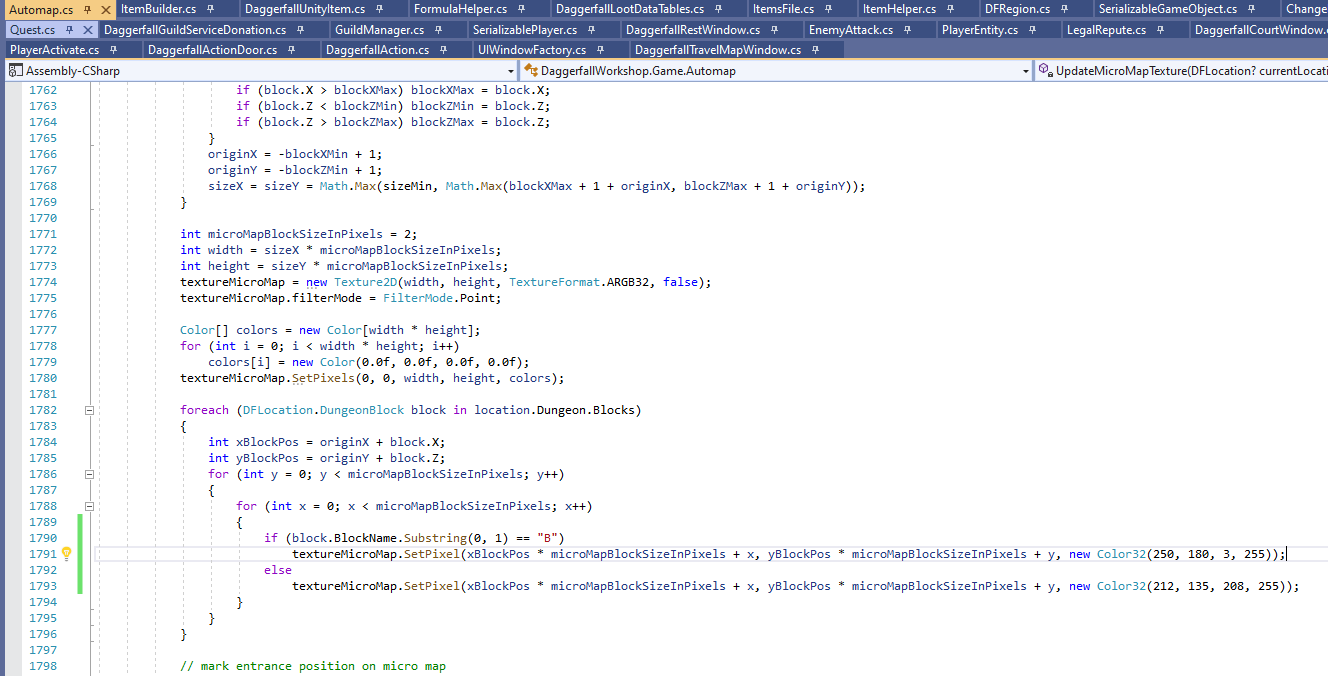 Alright so I changed the "Automap" script very slightly to do a basic implementation of this. I'm not sure if I should put a PR out or anything, but it's at least pretty simple to do (more simple than I expected originally.) But not sure if this should be a setting or something if it was to be implemented, I do think it is objectively more readable than the vanilla only yellow color.
Top

Alright, finally made a PR about this topic: https://github.com/Interkarma/daggerfal ... /pull/2374

Hope it gets any potential inefficiencies worked out and merged in the next version, I do quite like the multi-colored micro-map compared to the just plain yellow one, lol.
Top