A curated forum for approved mods. Users are unable to create new topics in this forum but can reply to existing topics. Please message a moderator to have your mod moved into this forum area.
Post Reply
371 posts

AN easy fix to this is if it's possible to stop travel when player receives a message?

Sounds doable. Can you give me any clues on what exactly I'd have to intercept?


Seems to be outrunning enemy spawns.

I'm afraid that particular problem is due to the now massively increased time acceleration. It used to hapen already earlier on, but not often. Now it seems that by the time the EnemiesNearby flag is set by DFU, the plyer has already ran away. I'm not quite sure how to fix that, honestly.

Just saw this here:
viewtopic.php?f=28&p=22628#p22628
It's possible that this will alleviate the problem, but I'm not convinced they are related. Next build will tell.
Top

Intercepting Quest QRC Messages like the ones you get when you receive letters. As for the code mumbo jumbo I really don't know how it works. Thats probably what you are asking right?
Top

I was hoping for something a bit more specific, but I guess I can figure it out if I get the time.

The major problem I can see is that I wouldn't expect there to be a different in messages generated by quest and just plain old other messages, and honestly I'm not sure if an external message box can even pop up while TT is active since at its heart it's an open UI-widget. Might have to listen to quest hooks directly, but I know nothing about those, so it might be a while...
Top

It seems to not have fixed the issue. I wonder if maybe you could increase the distance it detects the enemy if that would help?
Top

Not really possible, it's not TediousTravel doing the detection. It's the DFU core. I'm just checking a friendly boolean that says yes or no.
Top

The delayed enemy detection also causes problems with quests in a few cases. I think it'll probably get some improvement from here to 1.0, though no one has told me about it.
Come join Lysandus' Tomb, a Daggerfall Unity fan Discord.
In-progress guide for Quest Pack 1 here.
Top

I'd like to report it's quite easy to kill oneself by using Tedious Travel in high mountain regions (say, Dragontail Mountains, with Distant Terrain mod), even 10x acceleration can be sufficient. I think it's ok in itself, in a few places you can kill yourself even without tedious travel: your horse can loose grip and you fall to your death...
One issue however is that if you die while using tedious traveling and reload a game, tedious travel will stay active, so you can get in a situation where you die repeatedly, until you load some other game where tedious traveling is safe, switch it off, then load your intended game.
For this reason I think it would be safer to deactivate tedious traveling when (re)loading. 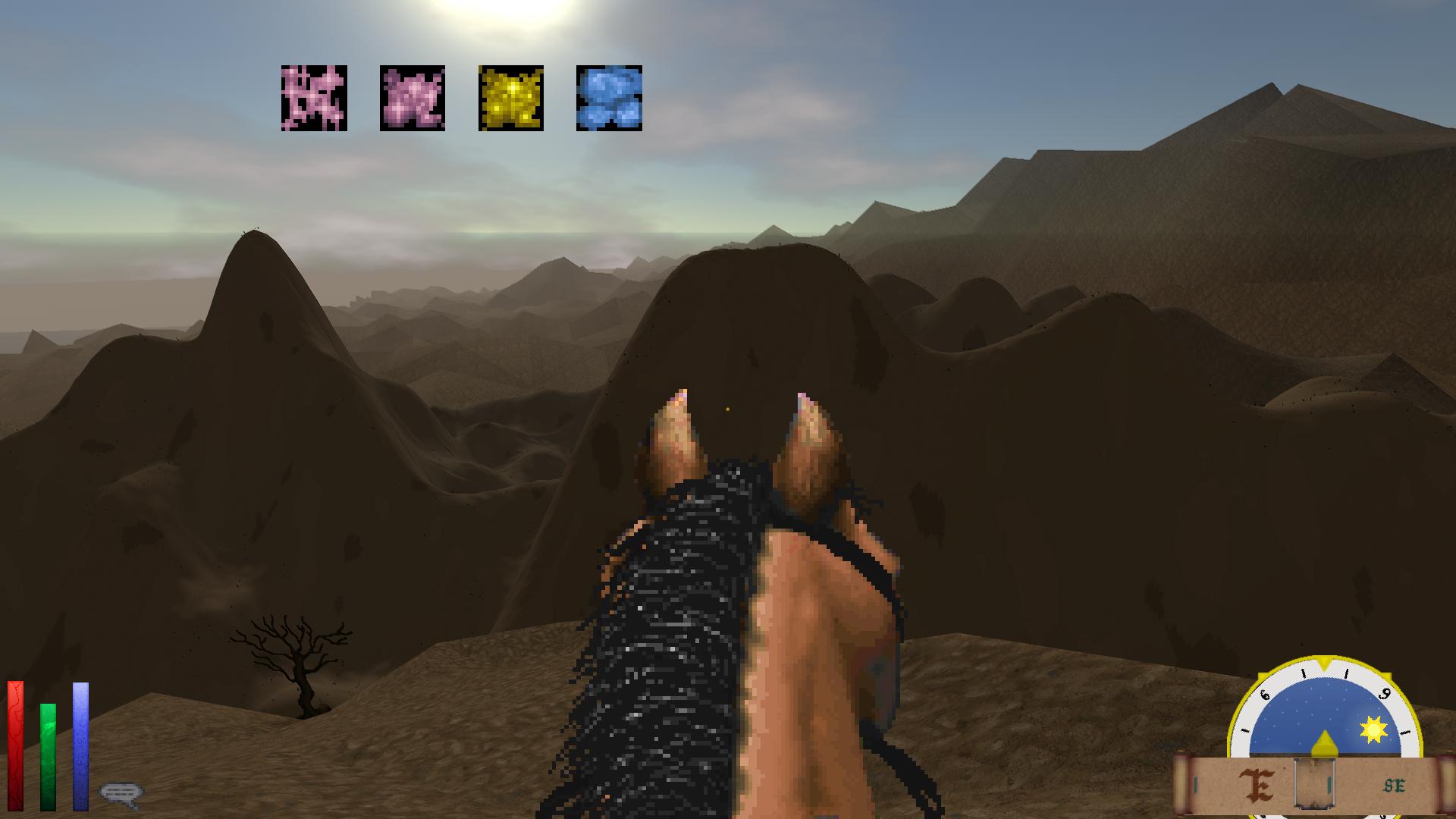 Im not sure if im missing something here but I have a mid end pc (8gb vram, 16 gb, ram decent ish processor, etc.) and I cant manage to go over 10x without severe frame issues or falling off the map. Im using the latest version of the mod with the dream mod and its recommended additions so im not sure if the mods are causing it, my old processor is causing it, or I missed something but if you have any ideas that might help me please let me know. p.s. I turned the setting to only load 2 chunks in hopes it would fix the frames issues and thats when I started falling off the map.
Top

Oops, yes, that's definitely an oversight on my part. At least this one should be relatively easy to fix.


Im not sure if im missing something here but I have a mid end pc (8gb vram, 16 gb, ram decent ish processor, etc.) and I cant manage to go over 10x without severe frame issues or falling off the map.

The framerate issue is a mix of mods and low power. TT literally runs the game faster by your time acceleration. Thanks to some fixes by hazelnut it now doesn't do *everything* that much faster anymore, but higher time accelerations will still require quite a bit of power, especially with visual mods installed.
The main bottleneck is not the rendering, however, but the loading, and the cpu cycles it diverts from the rendering thread.


p.s. I turned the setting to only load 2 chunks in hopes it would fix the frames issues and thats when I started falling off the map.

This explains the falling of the map issue perfectly, actually. Your idea that things will run faster if you load in less of the map is quite logical, but the problem is that "falling of the map" is merely a symptom of you traversing the world faster than it can be loaded. So by loading less of it at a time it gets faster, but now has less time to load the next chunk before it runs out of world to travel over.
Top

Thanks so much for this! I love how massive the world is, but running everywhere seemed insane and fast travel destroyed the sense of scale.

I made some "less tedious" tedious travel edits: one that takes the Running and Swimming skill into account and grants a chance to avoid being stopped by an enemy spawn based on them (up to 90% with 100 in both), and another that calls a HUDVitals.Update every TediousTravel.Update so that the fatigue meter would drop during autopilot. I don't really know what I'm doing, but so far it seems to work fine!

Thanks again, I learned a bit about how to make mods and its made playing Daggerfall much more enjoyable!
Top
Post Reply
371 posts