A curated forum for approved mods. Users are unable to create new topics in this forum but can reply to existing topics. Please message a moderator to have your mod moved into this forum area.
Post Reply
143 posts

Yes, my left eye took one year recovery after processing those PBR materials...

Too bad the B2M program I use to create those materials cant be automated. Its cca 1100 textures to process.
DREAM Nexus: https://www.nexusmods.com/users/73250038?tab=user+files
DREAM DFU Forums: viewtopic.php?f=27&t=1168
https://www.guru3d.com/news-story/foldi ... mance.html

Ufda, I totally misunderstood this function, my apologies. For some reason I thought that Daggerfall didnt come with textures for different climates, and that King of Worms had made new ones for the different regions. I didn't realize that it had all the textures and they just were randomized instead of organized. Thanks for expressing your confusion, it made me do more research.
Top

King of Worms wrote: ↑
Thu Oct 17, 2019 12:19 am
I think the static NPCs are already beyond the level AI can get us honestly. Unless some breakthru is made that is..

I tend to agree here.

Still I ran a few more tests, in particular Predrekee gave me a good idea to preprocess images with the dedither model. Still, interpolations based on the Lady model tend to give the best results with low-res NPC faces.

Here's a batch of dedithered sprites (dedither is mostly good for making smooth colour transitions, but it adds some further blur) processed with Lady/rebout_interp model at alpha 0.7 (meaning 70% Lady and 30% Rebout). These were then warp-sharpened using Image Analyzer: 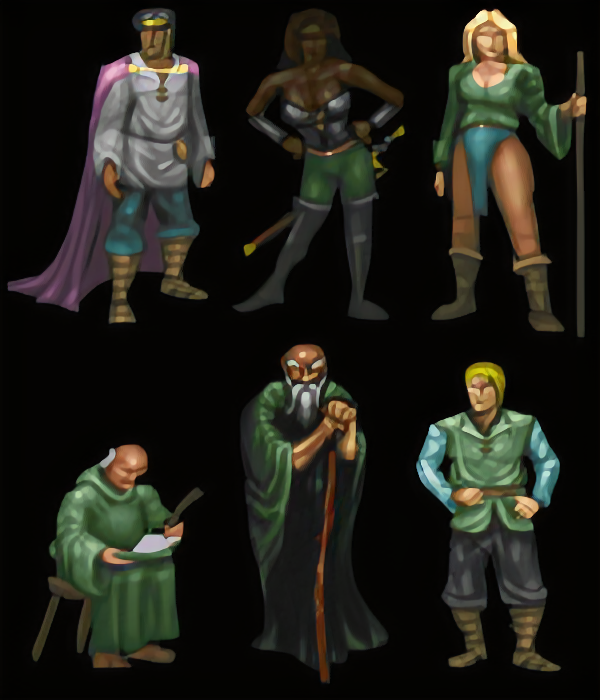 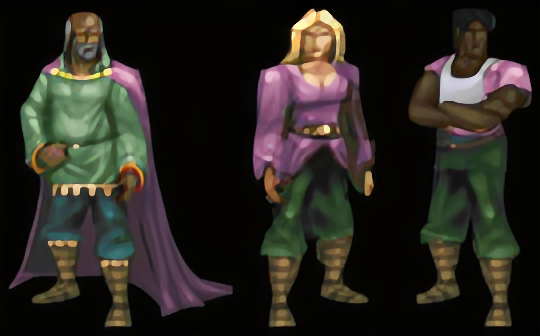 It would be valuable to apply these techniques on the animated npcs like dancers, daedras etc. Those are hard to manually redraw. Maybe commoners as well..

Its really impressive where you was able to take the sprites quality, from those 100x80 pixels. But unless there is some AI which can actually add details in some sensible manner, it will not match the current state of NPCs with loads of manual input. Plus the heads are made from portraits, which again gives additional details (which were further accented by manual input)

Here is where the NPCs are now, for comparison.
Its 5000x1000, its better to view it maximized... And this is already quite massacred by the jpeg compression
Spoiler!

King of Worms wrote: ↑
Fri Dec 27, 2019 5:36 pm
But unless there is some AI which can actually add details in some sensible manner, it will not match the current state of NPCs with loads of manual input. Plus the heads are made from portraits, which again gives additional details (which were further accented by manual input)

Here is where the NPCs are now, for comparison.

Apologies for the belated reply. I've experimented with ESRGAN a bit more, without 100 percent conclusive results, but here's something you might be interested in.

Your NPC upscales are a great job but to me there's a bit of a contrast between the high detail on the faces and elsewhere, and the general fact they're based on xBRZ upscales which is showing through, albeit to a different extent for each image. Out of the images in your post above, it's especially noticeable with Medora's sprite.

Now there's an interesting model by LyonHrt called charsprite, which produces remarkably good results with hand-drawn sprites (as the name would suggest). Here's a 4x upscale of Medora, on the left XBR by Image Analyzer (better than the xBRZ ScalerTest IMO) and charsprite on the right: 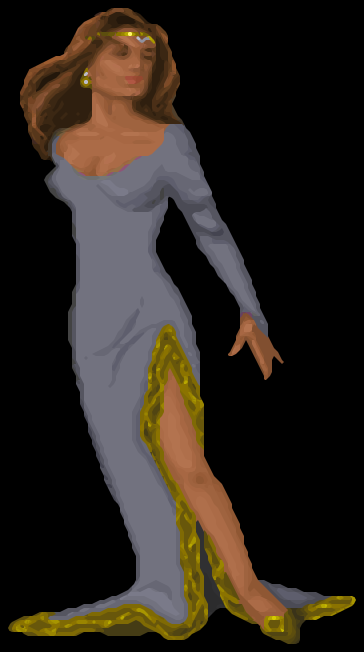 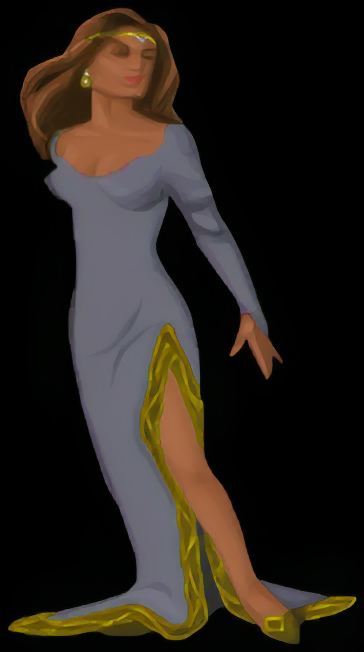 And the original image 4x zoomed with nearest neighbour: 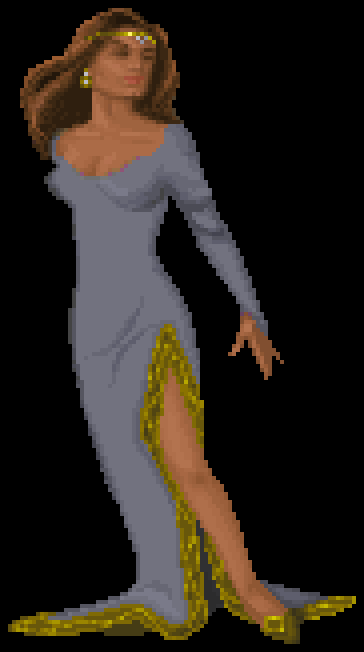 As you can see, charpsrite makes the lines smooth at high resolution (no pixel staircase leftovers unlike XBR) while actually quite faithfully preserving the "feel" of the original image.

And here's the lady in the white blouse:

Queen Aubk-i comes out less nice though and appears squinting: 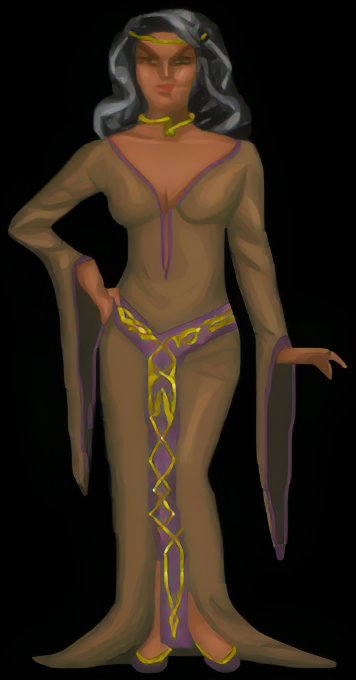 BTW, notice how in your edited version, Aubk-i's face from the dialogue screen looks chubby because the aspect ratio is not accounted for, unlike her portrait in the UESP Wiki. AFAIK, DFU still only allows vertical stretching only if you select a 4:3 resolution, and forgoes aspect ratio correction in widescreen modes (sorry if I'm wrong on this!).
Daggerfall clothes & armour fix | DOS Games Archive
Top

So I was not very happy with how Queen Aubk-i was processed by charsprite and tried out other models from LyonHrt and the Model Database. Alongside lots of garbage I got some pretty interesting results. 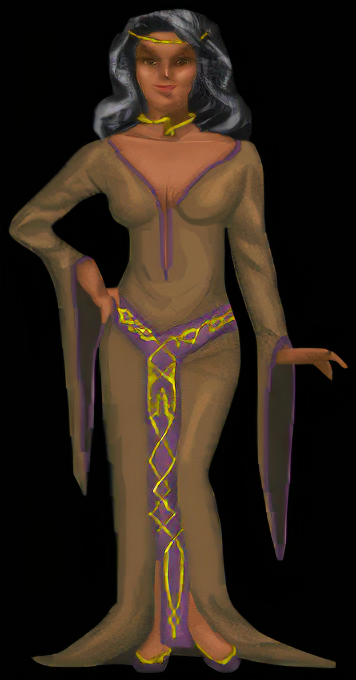 This one is geared towards upscaling faces and the result shows that. 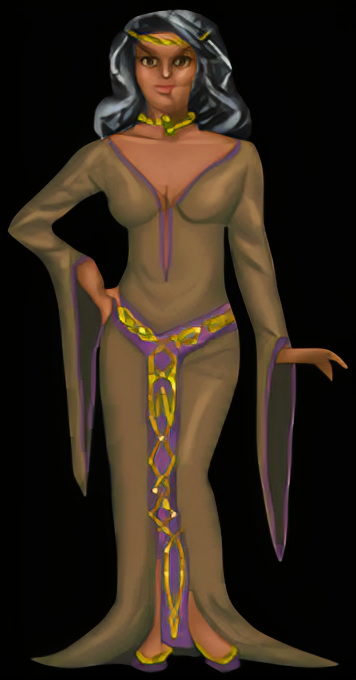 Not all models make the characters look like they're sqiunting. 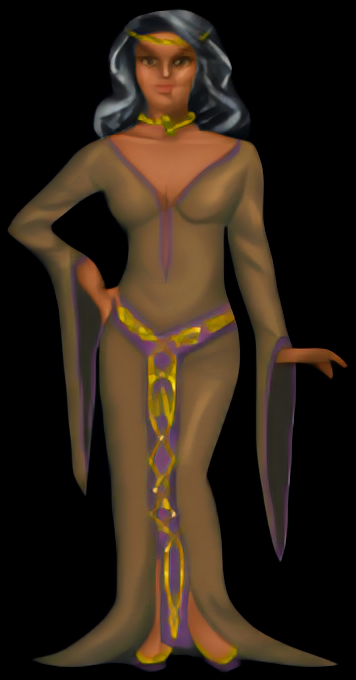 This one is closer to the original but it's also blurrier and the colours are a bit off. 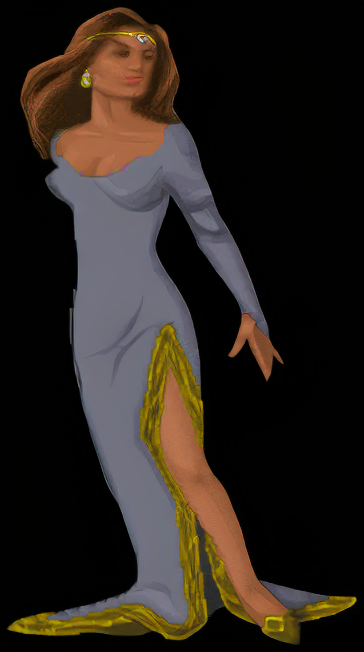 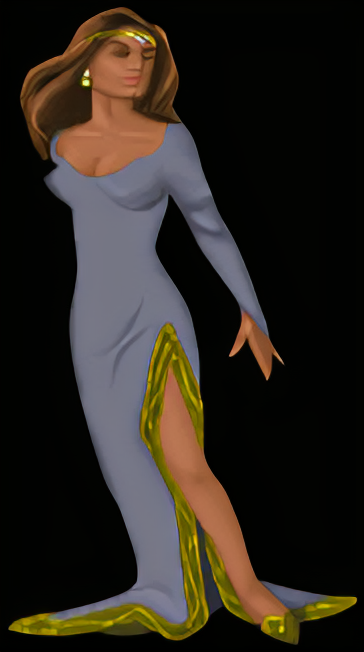 And here's an interpolation of FArt Super Blend and rebout_interp: 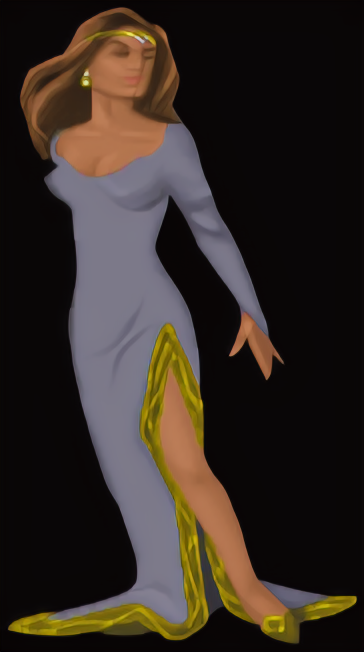 Hi, thanks for info, really nice results on the upscales indeed. Its worth checking out.

My NPCs are quite beyond the simple xBRZ upscale tho, they have a lot of artist manual input

I drop some images here so u can compare. 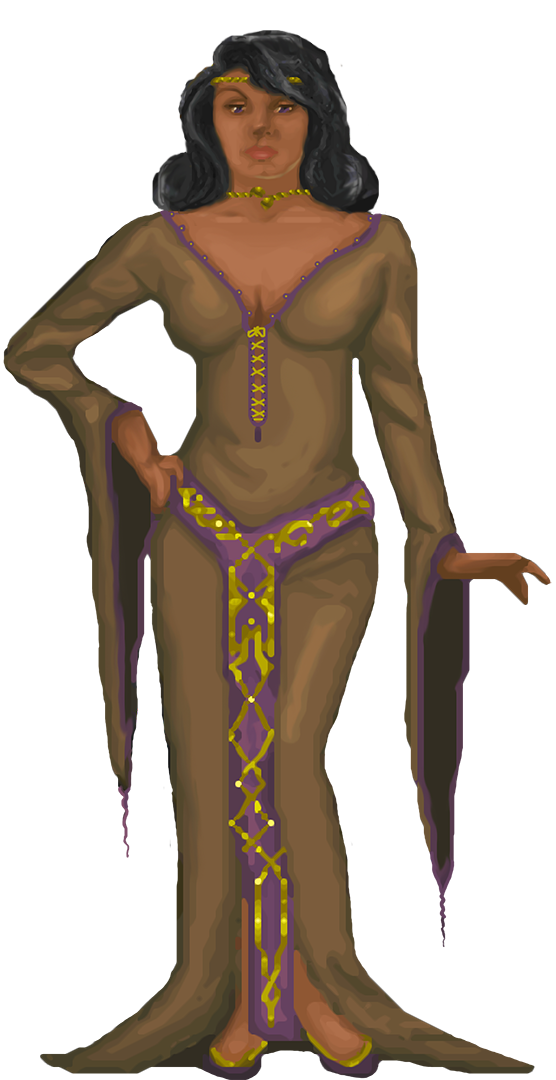 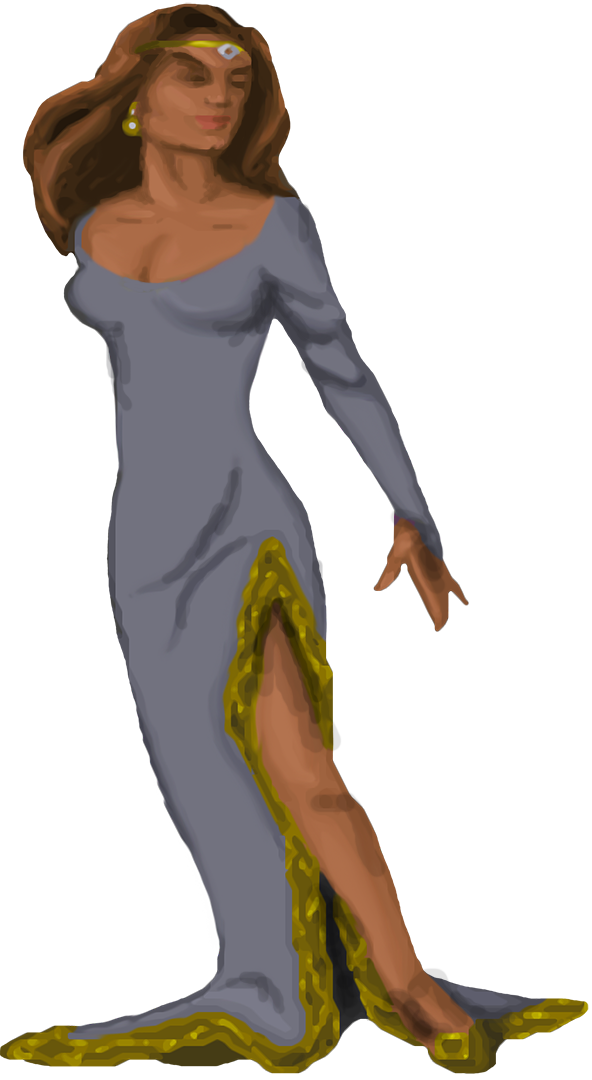 King of Worms wrote: ↑
Sun Mar 15, 2020 8:28 pm
My NPCs are quite beyond the simple xBRZ upscale tho, they have a lot of artist manual input

Yup, I know they've been edited, but there are parts where xBRZ shows through, like the boots of the girl with the while blouse: the lines are still "jittery" because xBRZ cannot handle diagonal shapes well, whereas many ESRGAN models can.

My idea is that is the same high-detail editing as you did could be applied/transferred to ESRGAN upscales that would generally result in more consistent images. (The jittery outlines are probably less noticeable with AA though as you've shown in another thread; but I'm a bit pedantic

Anyway, I experimented a bit more and found a very cool model for small flats: 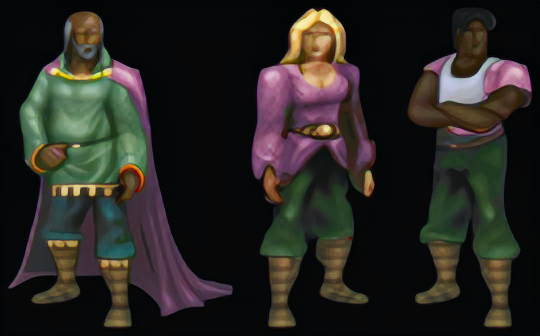 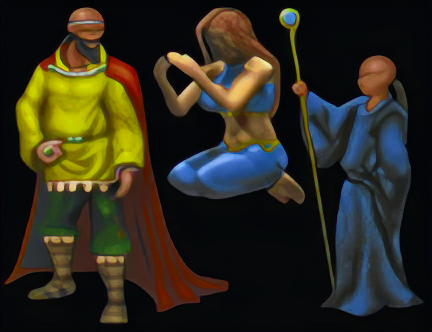 This is way better than any previous result, especially concerning the faces. Here's a before/after slide comparison of the first image:
https://imgsli.com/MTMyODI

I did this by interpolating Spongebob v6 De-Quantize with rebout_interp at alpha = 0.8 (i.e. 80% SpongeBob and 20% rebout). The problem is that it also makes the colours fade noticeably, so I had to auto-saturate them with GIMP.

And here's the same model with Queen Aubk-i: 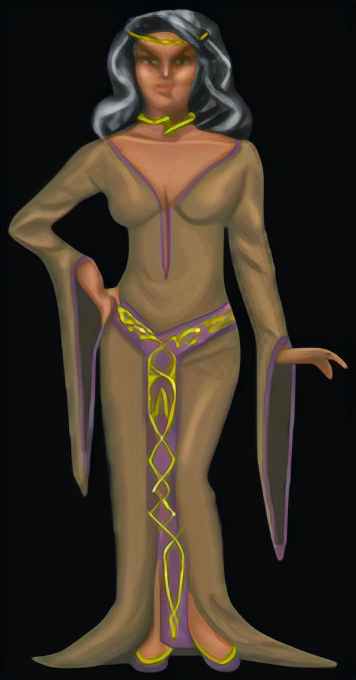 Its really good, that model should be used on the animated NPCs, all the daedras, dancers, smith, mages, animals, KoW, commoners... There it would be the most beneficial for overall quality increase. Can I send you the specific files so you can try those?

Really, my static NPCs are better than those animated, because those require much more manual input from me (more frames).. so upping the quality of animated NPCs might be really beneficial.

So this would be great expansion to what is currently available. IT would make a great start. But we need smooth outlines for those.
DREAM Nexus: https://www.nexusmods.com/users/73250038?tab=user+files
DREAM DFU Forums: viewtopic.php?f=27&t=1168
https://www.guru3d.com/news-story/foldi ... mance.html