I'll be using this thread to log my RP adventure. My character is created via Jehuty's The Daggerfall Roleplayer Generator thread.

Rules: 1 life, if dead, start a new character.
no abusing obvious glitches or exploits (bank loans) and no reloading to get a better outcome on things like combat and loot.

Here is my character: Nezyn T'ichka
Race: Redguard
Class: Barbarian
Goal: Find Nulfaga
Start: Betony in a Dungeon
Religion: Agnostic
Disability: No Spellmaker
Back story:
Nezyn was born into a family descending from the original redguards of betony. Historically his family line were nomadic warriors often confused for brigands. In modern age they were cast out of aid from bretons for not sharing similar ideals and traditions. His family was of a dwindling populous hidden away from the main cities and towns. Knowing that his people were slowly dying out and that their extinction was inevitable in the face of the changing world. In youthful vigor, he declared that his bloodline would not be snuffed without a fight. His rage stems from the desperate desire to be remembered, to make a mark upon the world before the sun sets on his dwindling kind. When he rages, a single thought permeates his burning mind: If I'm going down, i'm taking everyone with me. The eldest of his people told him to seek out the wise Nulfaga, a legendary and powerful redguard. Convinced that she can save his people Nezyn Tichka set out. Unfortunately for him fate had set forth a hard and dangerous path. As within the first week of his travel he was climbing some rocks when suddenly the ground gave way. Falling into the darkness Nezyn awoke in a dank dungeon.

Nezyn finding his bearings after that abrupt fall, discovered himself in a corridor between two doors. Looking upward he saw little possibility of escaping from which the way he came. Legends had been passed down by his people of places buried deep away and the horrors that haunted them. Some rubble partly blocked his way to the right. Spitting and unsheathing his sword he proceeded left towards the door. As he grew closer he saw faint light coming from the room beyond. With anticipation of battle he readied himself and burst into the room. A stagnant musk filled the air and to his surprise man nor beast stood in his way. But what lay in the center of the room made him tense. A coffin circled by skull candles. No other doors were visible in this room so he looked back behind which he came and proceeded towards the coffin. Looking first left, then right. He threw open the lid. A section of wall creaked loudly open and as he looked towards it a set of skeletal hands grabbed him by the throat! 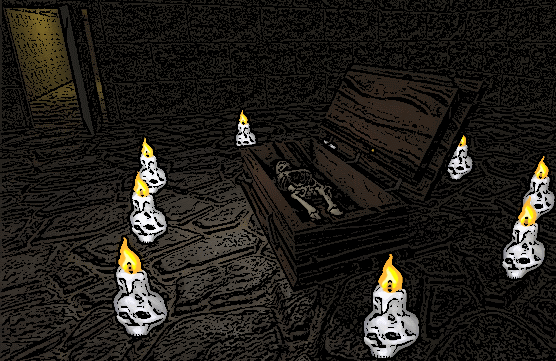 With sword in hand Nezyn attempted to punch the skeleton that was now staring at him with ill intent. His swing was short but his sword caught the skeletons arm breaking it free from the skeleton. Lunging backwards Nezyn removed the disembodied skeletal arm that still clung to his throat and threw it at the sketelon rising out of the coffin. The skeleton cackled grabbing it's former arm and wielded it. It then began moving towards Nezyn swinging it's armed arm. Without hesitation Nezyn gripped his sword tightly and swung with all his might at the skeleton. Again his swing was short and his blade struck the skeletons arm which was wielding it's other arm. With a raddle both arms bounced across the floor. The skeleton looked down, then towards it's arms and back at Nezyn. Hissing the skeleton made a biting motion but fell short as Nezyn blade quickly caught the skeletal rib cage crushing any life left in the remains. After that ordeal focus was realigned to the newly opened passage way.

Creeping in a fully un-stealth-like manner that only a barbarian can Nezyn approached another door which he kicked open. Two crates of different size await him in this room. With a quick glance around the dimly lit room he smashed open the larger box. Books and clothes spilled out onto the ground. He took little notice and ripped the lid off the smaller of the two crates. Inside a slew of herbs and other dried materials. This interested him more but was of little practical use for him beyond perhaps spicing meats on his travels. Glacing back to the books and clothes, Nezyn knew the elders of his people valued books. Grabbing randomly the books he thought looked the most boring he tossed them and some of the dried herbs into his pack.