Not enough here for a full blog post, but it's a milestone all the same so I decided to make a forum post instead.

I've just finished up all major parts of spellmaker UI, including the plumbing between effect system and new external text tables. It might not look like much right now, and you can't do anything with it yet, but this is the first real spell created inside of Daggerfall Unity. 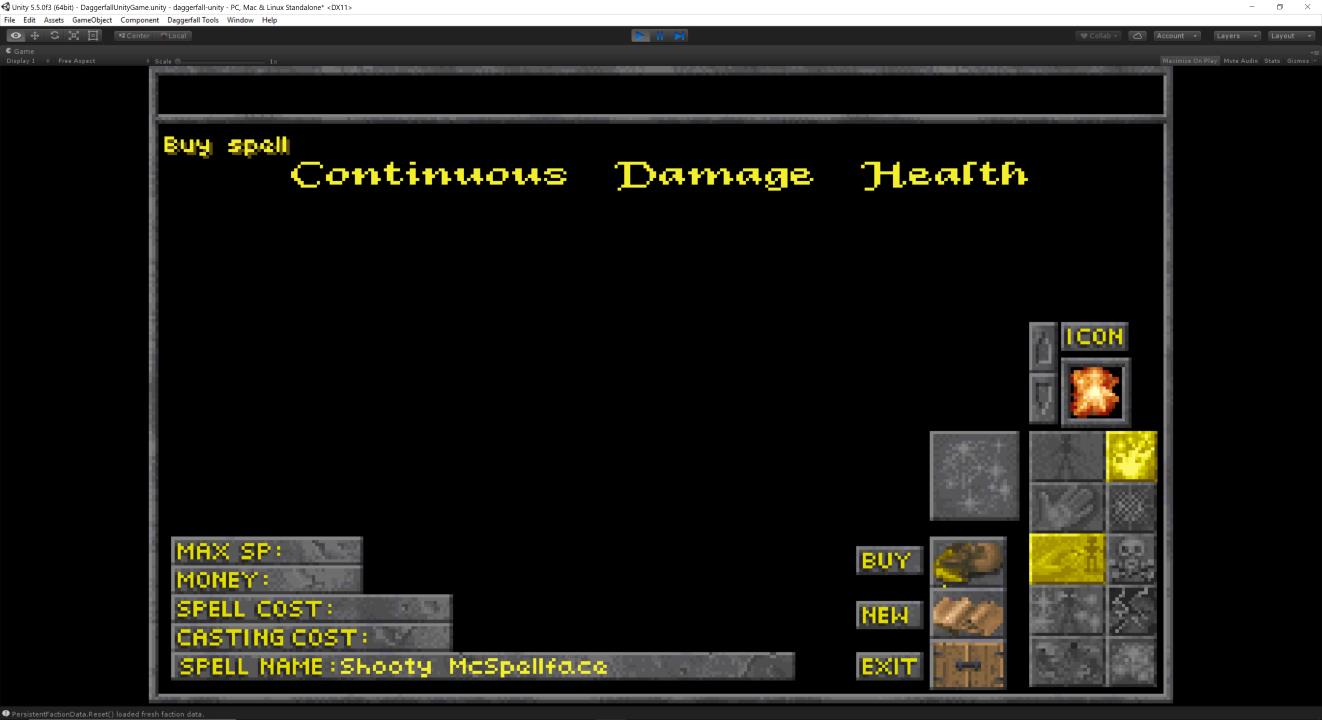 
The next step from here is saving spells into player's spellbook, complete wiring up casting front-end, and EntityEffectManager executing effects against target entity. I'm hoping the player will be able to hurl around custom spells within the week.

All spell costs (both gold and spell points) will be free during the build-out and testing stages. Sometime before stable 0.5 release all of the free test spells will be wiped from the player's spellbook and proper costs implemented. Until then, you'll be able to go nuts and build insane spells you could never cast in the game under normal constraints. Enjoy the test stage while it lasts.

The first three magic effects to be completed will be Continuous Damage for Fatigue, Health, Spell Points. These will be the only effects for a little while as I add more "glue" between all the systems. By the time I'm done with this stage, I can begin building out the various classic effects in earnest. This is where things get a lot more fleshed out and starts to resemble the real deal in every way.
Top

With a programming speed attribute of 100, Interkarma is considered meteoric.

This is indeed a insane pace, exciting news! I can imagine Interkarma is having a great time, when major things like this are being materialized under his hands and progressing forward. Im for sure glad to be able to witness this stage of DFU, thanks!!
DREAM Nexus: https://www.nexusmods.com/users/73250038?tab=user+files
DREAM DFU Forums: viewtopic.php?f=27&t=1168
https://www.guru3d.com/news-story/foldi ... mance.html

Such excitement to see that screen functioning in DFU. Interkarma is rushing through the spells roadmap like a barbarian!
My Deviantart page, I have some Daggerfall stuff in there.
Top

I'm so happy you remembered the black triangle story I linked to a while back. I think you're right also.

And thank you all for the kind words.

Yeah, it's been great watching the game get more and more complete

This is such an amazing place. Interkarma you are rocking it. I'm so excited to test this out.

What a great achievement.
Top

This is Incredible work! At this pace the games gonna be complete in no time, Keep being based Interkarma, can't wait to play this when it's finished.
Top

Oh snap! Dude you're really knocking it out of the park!
Top

Now working on spellbook UI. Credit to Lypyl for stubbing this out a while back, now I can finally wire everything up for real to the effect system.

One of my tasks is to ensure good stability for effects. Because effects will be modable, it's possible the player might remove a mod for a certain effect. In which case the spell needs to remain in spellbook until player decides to either restore mod to fix spell, or delete spell if no longer required.

It's also possible player has a spell imported from a classic character requiring an effect not implemented yet. In this case, spell will just sit in the spellbook until I've implemented the effect it is looking for. I haven't implemented spellbook import yet, however.

The important thing is the game doesn't crash when presented with an invalid spell effect, and doesn't lose data from player spellbook. 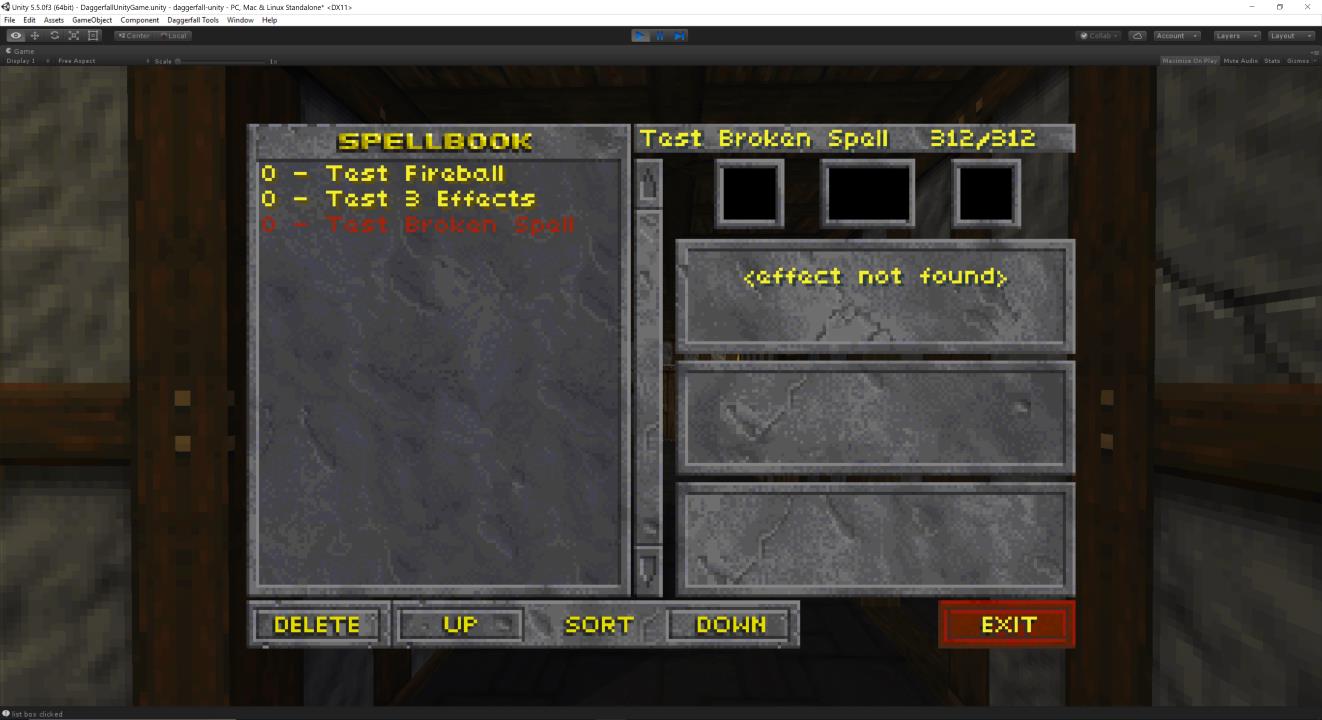 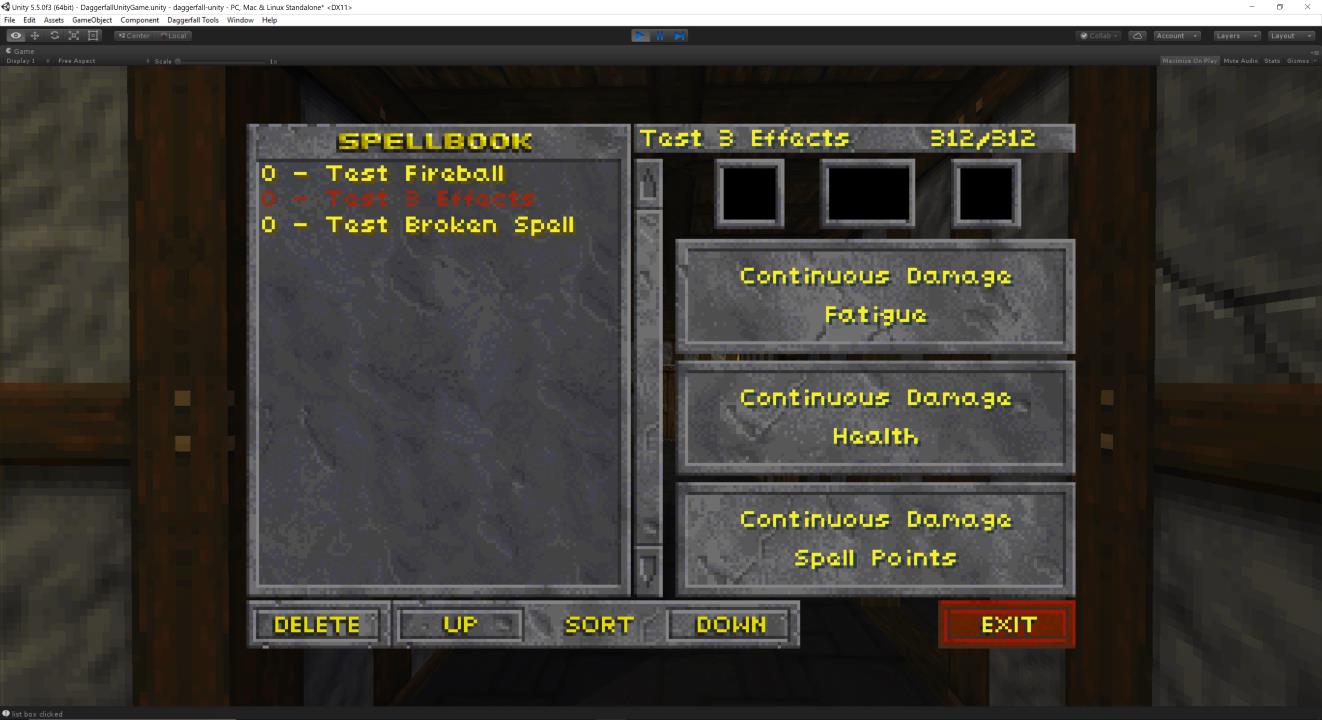